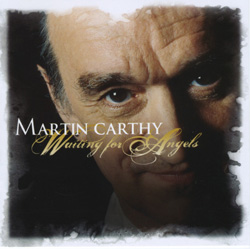 Waiting For Angels was a very long-awaited solo album from Martin Carthy, the previous one Signs of Life was six years before. This splendid album was produced by Eliza Carthy & Ben Ivitsky, sees Martin at the peak of his creativity and ability and the Carthy/Ivitsky production puts the music firmly in 21st century. Four of the tracks feature Martin solo, and on the remainder, he is marvellously and creatively backed by a number of great musicians. The album includes four instrumental tracks showcasing Martin’s unique skills – the title track itself is a Carthy composition. He also revisits the remarkable Famous Flower of Serving Men to produce the definitive version of this classic (his earlier recording was recorded back in 1972, nearly 30 years before.

“A remarkable album” A Folk Album of the Year 2004 ★★★★ MOJO
“Arguably the greatest English folk song performer, writer, collector end editor of them all – his guitar playing is stunning. The undisputed highlight isâ€¦Famous Flower of Serving Men.” Q Magazine
“As much of a landmark as anything he did in the sixties and seventies; the key track is Famous Flower of Serving Men; you hang on for dear life to every word as the horrific story of infanticide, evil and bloody revenge unfolds; ..plenty of outstanding guitar.” fROOTS