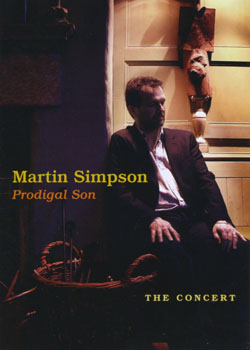 With the release of Prodigal Son (winner of BBC Radio 2 Folk Award’s album of the year 2008) Martin Simpson created a contemporary classic that effortlessly crossed musical boundaries and exhibited what many had known for years – here is one of this generation’s most talented songwriters, singers and guitarists.

Here on this special DVD, Martin takes us on a 2 hour live journey through that album, expanding and reinterpreting as only he can – and throws in a few more tunes for good measure. Filmed at a special concert at the Union Chapel in London, this professionally shot DVD has superb 5.1 sound and looks and sounds great. Martin is on top form, with the DVD highlighting his virtuoso playing and also the quality of his collaborative work when he is joined by Andy Cutting on Diatonic Accordion, Andy Seward on double bass and Kelly While on backing vocals. The evening is topped off by a stunning version of the BBC Radio 2 Folk Award’s song of the Year, NEVER ANY GOOD.

As an added bonus, there is a unique short film made by Martin called YOU CAN GO HOME retracing the steps of his youth under the shadows of the blast furnaces in his native Scunthorpe. It is both a revealing and, at times, highly humorous backwards glance.
Running time: 130 minutes, Cert E – Recorded live at the Union Chapel, Islington, London, – 13th November 2007.

THIS DVD IS PAL FORMAT AND ALL REGIONS (REGION FREE)
DISCLAIMER! PAL FORMAT is the standard system for Europe, Australia and New Zealand and this DVD will play on any DVD player in these regions. If you live in North America, Japan or many other countries, you must have a DVD player and television that can play PAL FORMAT discs. If in doubt, please check your manufacturer’s handbook before ordering.

“Simpson’s performances are engaging, his timing is pin-sharp, and his communication with his audience reveals his skills as a story-teller as clearly as his singing. In my opinion this DVD casts a spell that a studio album can’t come close to achieving” – English Dance and Song

“…Martin on very fine form indeed and clearly fired by the unique ambience of the venue. The first set showcases Martin’s matchless solo presence – his unrivalled musicianship, superlative instrumental and vocal skills and thoroughly absorbing and companionable anecdotes and background information….the whole film is by turns fascinating and revealing. The emotional impact of the music and the unbridled sympathy of the performances is so strong. And the very high standard of the 5.1 sound and the professional [and admirably straightforward and unintrusive] concert photography is everything you could hope for in the DVD package.” – NetRhythms