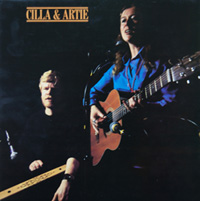 ‘Cilla & Artie’ is a splendid album from Cilla Fisher (a member of the influential Fisher Family) and her husband Artie Trezise. The record was ‘The Melody Maker Folk Album of the Year – 1979′. Joining Cilla and Artie is an international collection of “session” musicians including Alistair Anderson, Johnny & Phil Cunningham, Rick Lee, Brian McNeill and Bob Zentz. The songs are mostly from the tradition with, “Blue Bleezin’ Blind Drunk” and “The Gypsy Laddies” but also include a grand version of Stan Rodgers’ “The Jeanie C” and the wildest ever arrangement of Ewan MacColl’s “Fisher Lassies”.