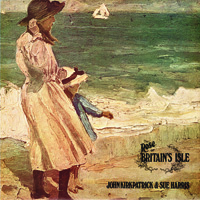 John Kirkpatrick and Sue Harris play and sing English country music with a rare authority. John is a well known session musician, recording with Richard and Linda Thompson, Gerry Rafferty, Pere Ubu, Roy Bailey and many others. John and Sue were founder members of the Albion Country Band, and John has been a member of Steeleye Span and Brass Monkey. ‘The Rose Of Britain’s Isle’ was voted the record of the year 1974 by Folk Review.