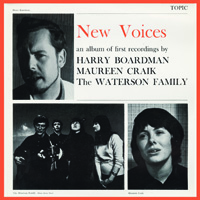 ‘New Voices’ was a ground-breaking collection, one of the first albums to feature the younger generation singers of the mid 20th century British folk revival. The record featured the recording debuts of Maureen Craik and Harry Boardman alongside the Watersons’ first recordings for Topic records. Boardman was an important agent in the later ‘Deep Lancashire’ and ‘The Wide Midlands’ projects and made several solo albums for the label. The Watersons career has gone from strength to strength, at the time of writing the various members of the family have continued their recording relationship with Topic for over forty years.