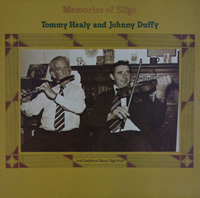 Irish music in the old ‘Sligo Style’ was carried far and wide by such migrant sons as Michael Coleman, Paddy Killoran and Michael Gorman. It was the tradition that two London based musicians – Tommy Healy (flute) and Johnny Duffy (fiddle) – grew up in. They continued adhering to the style playing at home in Ireland and later in London. Accompanied by pianist Reg Hall the two are beautifully captured on this intimate recording from the mid-1970s.

1  Reels: Tarbolton / The Longford Collector / The Sailor’s Bonnet
2  Jigs: The Wandering Minstrel / Fasten the Legging / The Smash
3  Hornpipes: The Rights of Man / The Honeysuckle
4  Reels: The Boys at the Lough / The Merry Blacksmith
5  Jigs: The Scotsman Over the Border / Tell Her I Am
6  Reels: The Montua / The Happy Days of Youth
7  Reel: Fred Finn’s Reel
8  Reel: The First Part of the Lancers
9  Jigs: The Gold Ring / Richard Brennan’s Favourite
10  Reels: Miss McLeod / The Wild Irishman
11  Jig: The Grey Goose
12  Reels: The Humours of Lissadel / Sweeney’s Dream
13  Jigs: Cavan Lasses / Rose of the Heather
14  Reels: The Enchanted Lady / The Holy Land
15  Waltz: Mrs Kenney
16  Reels: Martin Wynne’s No.1 & No.2