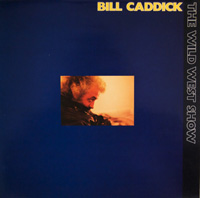 Bill Caddick has an enviable reputation – sometime member of the Albion Band, Home Service and songwriter of choice for June Tabor. He has recorded few albums during his long performing career; many fans regard The Wild West Show as one of this finest recordings. The album was recorded by Andrew Cronshaw and sees a crack team of close friends and former Home Service colleagues accompany Caddick, including June Tabor who adds sublime duet vocals to ‘Eights And Aces’.