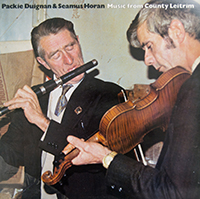 Flute player Packie Duignan was a fine musician who had many of the tunes of the Leitrim player John McKenna, a distinguished and prolific figure in Irish-American recording circles of the 1920s and ’30s. He is joined on this splendid record by another Leitrim musician, fiddler Seamus Horan.