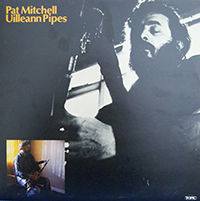 The several strands that make up Pat Mitchell’s piping are none of them especially unusual, but cumulatively interesting in the way they reveal how Pat’s music has evolved without what has always been held to be the massive benefit of an immediate environment in which traditional music is alive and esteemed. Pat, like many other people who might be classed as urban, twentieth century – some would say, disinherited – has gone looking for his music, and it’s important to document his case for an understanding of how such a person fares, and for some insight into the state of traditional music in Ireland today.