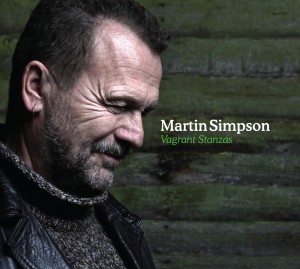 Vagrant Stanzas is a splendid, intimate new recording from finger-style guitar maestro Martin Simpson. Encouraged by his near neighbour Richard Hawley, Martin set out to record his new album completely solo. The ambition was to record just one man and his guitar (or banjo) close-miked and personal. Most of the performances are first or second takes. So much material was recorded that the deluxe edition includes an extra CD of eight outtakes from the recording sessions – quite honestly they’d have made the cut on just about anybody else’s album.

“This is not a record of repairs and corrections, this is what I do at a gig. It’s the first time I’ve made a studio album which deliberately tries to capture the immediacy of a live performanceâ€¦. in fact it is the intimacy of playing to a friend which is at the heart of this album.”

The album sees Martin collaborate with some of the best producers and engineers in the business, including multi-Grammy Award winning mastering engineer, Silas Brown. The CD has been co-produced by Martin alongside American producer Peter Denenberg and, our own Richard Hawley, who produced the UK part of the CD in Sheffield, at the legendary Yellow Arch Studios. Vagrant Stanzas is made up of a mixture of Martin’s original compositions, including a song commissioned by BBC Radio 2 for their award winning Radio Ballads series, alongside classic songs by Bob Dylan, Leonard Cohen, Chris Wood, Leon Rosselson and, of course, the ubiquitous ‘Anon’ of Folk ballad fame.

“One man with guitar and banjo and an acutely tuned ear for a good tune and a powerful lyric can certainly whip up a lot of different moods and styles. It’s all down to attitude.” fRoots

“There is a distinctive brilliance to Simpson’s guitar and voice – these are vocals from the back step, from the songs’ stark interiors, understood and played out by a man in the third age of life.” Songlines

“What you get is pure and fluent Simpson musicianship. A very fine record.” The Telegraph 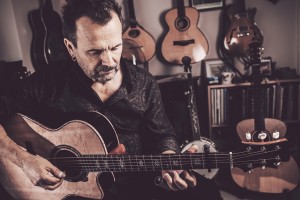