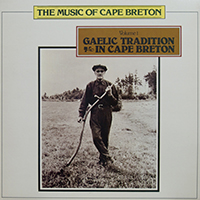 This anthology of traditional, Gaelic singing and instrumental music has been selected from recordings made in the spring and summer of 1976 in Cape Breton Island, Nova Scotia. Until recent decades Cape Breton has existed in relative cultural isolation, and is now the only region in North America to have retained the Gaelic language, along with the wealth of songs and instrumental tunes, that arrived with the early 19th-century immigrants from the Highlands and Western Islands of Scotland. Since that time a highly evolved and varied folk-culture has flourished in the Gaelic-speaking rural communities down to the present, making this small corner of the Canadian Maritimes one of the most important areas of living Gaelic tradition remaining today.