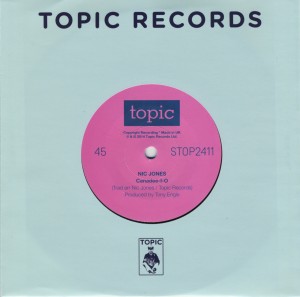 Nic Jones’ Penguin Eggs LP was first released on Topic Records in June 1980 to great critical acclaim. The album continues to be a mainstay of the Topic Records catalogue, consistently repressed on CD and vinyl, and available digitally, but Nic’s music has never been released on a 7″ single, until now.

The perfect combination of guitar, voice and recording technique, ‘Canadee-I-O’ is the first track on Penguin Eggs, showcases Nic’s infectiously rhythmic guitar-style and vocal strength, and his peerless arrangement was used by Bob Dylan when he recorded a version for the 1992 album ‘Good As I Been To You’.

The B-side is a song Nic had been playing and singing as ‘The Flanders Shore’ for some years before this recording; ‘The Flandyke Shore’ is a mysterious and moving tale of love and loss, given poignancy and depth by his unique delivery.

The limited edition single is presented in a new Topic label sleeve with an additional sheet of photographs and period reviews.