The Stewart Family – The Travelling Stewarts 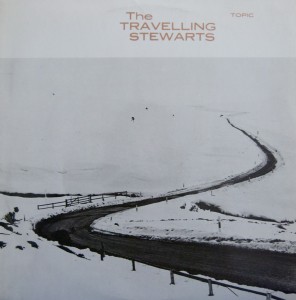 The Stewarts are a proud family of Scots travellers who claim descent from the Royal House of Stewart and who have music in their bones. Belle Stewart was one of the great traditional ballad singers and her daughters, Sheila and Cathie, inherited the family talent in full measure. Belle’s husband Alex Stewart was a fine exponent of the Highland warpipes. For The Travelling Stewarts album the family were joined by many of their relatives, including Jeannie Robertson, Lizzie Higgins and Davy Stewart.

“You’ll never see me laughing or shouting at a Pakistani or anybody like that; no, never… Long, long years ago when I was a wee boy. My auld mother told me that all travellers came from the same place as these people. and so I never do anything that might offend them. Anyway, they`re having a hard time of it. just like the travellers…” – Davy Stewart, itinerant singer.

Recorded in Scotland by Bill Leader, 1967
First Issued by Topic 1968