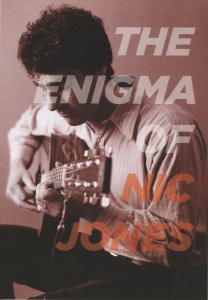 ‘The Enigma of Nic Jones‘ – is a beautiful, award-winning documentary directed by Michael Proodfoot and narrated by Cerys Matthews, with contributions from Nic Jones, his friends, family, collaborators and musicians inspired by the man and his music.

After a forced absence from performing of nearly thirty years, Nic Jones’ reappearance on the folk scene in 2011 was rapturously welcomed, accompanied in concert by his son Joe and as a trio with Belinda O’Hooley on piano. In 2013, Nic was named Folk Singer of the Year at the BBC Radio 2 Folk Awards. This arguably overdue accolade underlined the esteem in which Nic’s work and place in folk music is held, and was a significant marker in a journey that has taken Nic from respected session musician to established solo artist, then to folk-hero and crossover success via his now-classic Topic album Penguin Eggs.

First shown on BBC Four in 2013, this DVD adds full performances of seven pieces of music that briefly appear in the main documentary:
The Nic Jones Trio : Master Kilby, Rue The Day, I Only Spoke Portuguese
Eliza Carthy : 10,000 Miles
Blair Dunlop : Canadee-I-O
Pete Coe : Monday Morning, Astley’s Ride / Up and Away
“the photography’s gorgeous, the talking-head interviews are heartfelt and enlightening,
and the comeback footage” is tentative but often deeply moving.” Time Out