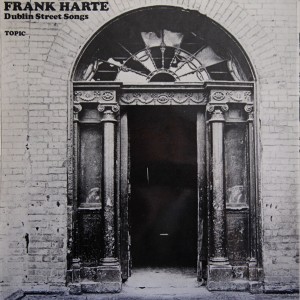 Frank Harte (1933-2005) was a traditional Irish singer, song collector, architect and lecturer; a great exponent of the Dublin street ballad and widely known for his distinctive singing, his Dublin accent having a rich nasal quality complementing his often high register.

The material is all his own, gathered from the abundant cornucopia of traditional Anglo-Irish folksong. He has been collecting since he was twelve years of age and his infallible ear and prodigious memory have recorded nearly a thousand songs, most of them unpublished, though many of the songs on this disc are in Colm O’Lochlainn’s Irish Street Ballads 1939 (C.O’L.,1) and More Irish Street Ballads 1965 (C.O’L.,2).

To explain in detail the history, the language, the music of these songs would require not a note which would fit on a record sleeve but a small book; but these are ballads of the Dublin streets, commonplace once, now remembered by a few. They were not all made in Dublin, but Dublin preserved their life.