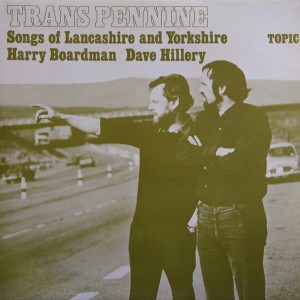 Harry Boardman sang both unaccompanied and accompanying himself on the anglo-concertina or banjo. He wasactive as a folk singer and collector of Lancashire folklore from the late 1950s with some collaboration from his wife Lesley. Dave Hillery appeared regularly with Harry at the Pack Horse Hotel in Bridge Street, Manchester in the early 1960s, developing his interest in Yorkshire regional material through their association.

Although most of the songs in this album represent well the character of their respective counties, there has been no attempt to create a definitive programme they are simply the personal choice of two men from either side of the backbone of England.