Various Artists – The Lambs on the Green Hills 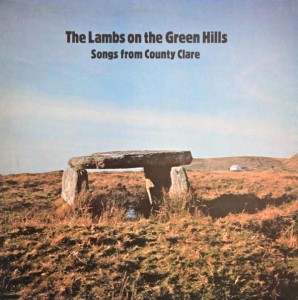 County Clare has long been known as one of the richest areas for music and song throughout Ireland. Petrie, writing in his ‘Ancient Music of Ireland’, published in 1855, was enthusiastic about the tunes he heard. His remarks spring from his travels through Clare during the early 1820s and throw into relief musical traditions that clearly go back deeply into the eighteenth century at least. Even if it’s felt that Petrie’s enthusiasm may have run away with him we can’t doubt the more recent, towering figures of Garrett Barry, George Whelan (Kerry born), or Willie Clancy, and the Bobby Caseys, Miko Russells and John Kellys of today; all of whom testify to the strength of the musical heritage of the people of the Dal Cais.