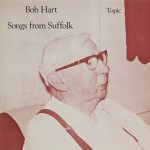 Bob Hart, born 1892, belongs to the same grand company of East Anglian traditional singers as Harry Cox and Sam Larner, Jumbo Brightwell of Eastbridge and Bob Scarce of Blaxhall. Schooled in Southwold, Bob started farm work after a move to Trentham, but quickly left to work on a sailing trawler out of Lowestoft:

“We used to travel as far as the Shetland Islands, from May to November, and work back to Grimsby. It was at Grimsby where I learned some of my songs, and where I first heard The Banks of Sweet Primroses. I learned As I Strolled out to Aylesbury from a man called Jack Harling, of Snape. Funny Little Place to Have One, Underneath her Apron, and The Female Cabin Boy are songs I seem to have always known. Broadside I learned from Bob Scarce of Blaxhall.”