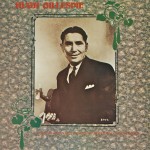 The recordings of Hugh Gillespie have a quite different ‘feel’ from other American-Irish fiddle music of the late 1930s period. The somewhat unusual choice of guitar rather than piano for accompaniment certainly contributes to this distinctiveness, but probably the decisive factors are Gillespie’s ‘singing’ style and highly personal technique. He learned from Coleman a device he calls ‘back trebling’, and also uses drones and fractional flattening or sharpening of notes to great effect. Such techniques are by no means peculiar to Coleman or Gillespie – indeed, most Irish musicians use them in some degree – but every musician stamps them with his own particular emphases. In these recordings of Hugh Gillespie at his peak, between 1937 and 1939, the sum of these various elements is a unique and outstanding series of performances.