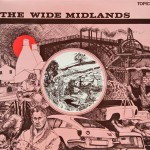 The Wide Midlands: Songs, stories and tunes from the central Counties.

‘Birmingham, the Midland metropolis, was an important centre for the printing of broadsides and it is inevitable that this selection should lean towards the West Midlands. As well as broadsides, a number of industrial songs and fragments have been included, which have survived in oral tradition. The final song was written as lately as 1970. The toughness, the resilience, the humour and pride of the urban Midlander, both in hard times and in easier days, are the qualities which emerge from these songs and stories. They are as much ‘in the idiom of the people’ as their cousins from the country.’