Songs of Defiance: Music of Chechnya and the North Caucasus 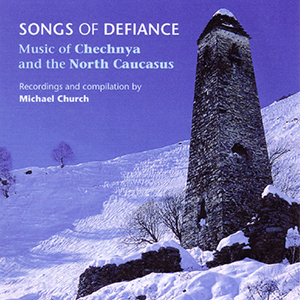 The small but troubled Republic of Chechnya is a member of the Russian Federation, located in the North Caucasus Mountains between the Black and Caspian Seas. With a population of a little more than one million, it’s fierce fight for independence has kept it in the news and kept visitors out. A beautiful but harsh mountainous landscape has made for a traditionally hard and resilient people whose culture has rarely reached the outside world. Michael Church has recorded and compiled the stunning music on this disc partly in Chechnya itself and was arrested by the Russian Police for his efforts.

The music on SONGS OF DEFIANCE is profoundly moving and, perhaps surprisingly beautiful: a magnificent testimony to the resilience of the Chechen people.

The countries of the North Caucasus are part of Europe, but kept in political purdah. This ground-breaking album lifts the veil on the vibrant musical traditions of a war-torn, secret region. For three centuries, successive Russian governments – Tsarist, Soviet and post-Soviet – have oppressed its nationalist movements, periodically deporting whole populations; Islam has been the rallying point for resistance. The music on this album is magnificent testimony to the resilience of these people, and to their defiant belief that they will one day re-inherit their lands. Their music sparks wild dances and speaks intimately of love, but it’s also a living history celebrating heroes and battles. There are great voices here, made to carry across the mountains.

“Just when you think you have a grasp on indigenous European music, along comes something that blows away all your preconceptions. This music seems to come from some mysterious other place, with its rough-hewn energy and its passionate social engagement. Much of the material – text as well as music – is profoundly moving and very beautiful. Michael Church has done us a great service by bringing it to our attention.” – Gavin Bryars

“Sounds that will enlighten even the most jaded ear.” – Michael Nyman

You can read Michael Church’s comprehensive sleeve and track-by-track notes for the album, here.