Martin Simpson was born in Scunthorpe, England. He took an early interest in music, learning to play the guitar and banjo and performing at local folk clubs. In 1970, he dropped out of John Leggott College to become a full-time musician.

In 1976 he recorded his first solo album Golden Vanity. In the same year he opened for Steeleye Span on their UK tour. He performed with Ashley Hutchings’ Albion Band in 1979. Martin also toured and performed with folk singer June Tabor, who did not play an instrument herself. They would later record three albums together.

In 1985 he moved to Bloomington, Indiana and married American singer Jessica Radcliffe, and shortly afterwards they relocated to Ithaca, New York. During the decade he continued recording a mix of traditional and more contemporary material, including several entirely instrumental albums.

Notable work in the 1990s included, in 1995, an album with Chinese pipa play Wu Man, Music for the Motherless Child. The album was produced in a single session, between 7:00pm and 2:30am and blends western and Chinese improvisational approaches, although five of its six tracks come from British or US traditions. In a similar vein was Kambara Music in Native Tongues with David Hidalgo from “Los Lobos” and violinist Viji Krishnan, a mix of Hindu and contemporary songs.

Not until 1999 did he record several of his own compositions on Bootleg USA. It was then, along with Jessica Racliffe, that he co-founded a record label called “High Bohemia”. During his 1994 visit to the UK, he recorded Martin Simpson Live in Oxford. In 1999 he was a session musician for an album by Welsh singer Julie Murphy. The Bramble Briar (2001) was a turn to basics, a collection of English traditional folk songs.

2003 saw the release of Righteousness and Humidity, a set focusing almost exclusively on music from the Deep South, played on a variety of instruments and featuring Steeleye Span’s Rick Kemp. This recording was a nominee for BBC folk awards album of the year in 2004. Simpson won the BBC Radio 2 Folk Awards in 2004 in the category of Best Musician. This was followed in 2005 by Kind Letters in which he mines once again the rich seams of English folk music which proved so fruitful for The Bramble Briar.

In 2007 Simpson released Prodigal Son. The 2008 BBC Radio 2 Folk Awards voted it as best album. The fRoots critics poll voted it as the 7th best new album of 2007. It is a mixture of traditional songs and Simpson originals, the highlights of which possess a distinctly southern American flavour. Jackson Browne, Kate Rusby and Kellie While guest star here. In December 2007 he performed on Later… with Jools Holland.

Simpson has written guitar instruction books and recorded DVD guitar tutorials. His career came full circle in 2003 when he teamed up with June Tabor again. In 2004 he surprised everyone by performing at a gig in Nettlebed, Oxford, where he played banjo all evening, without touching a guitar. A readers’ poll of the magazine Acoustic Guitar voted him as number 12 in the world in 2005. Martin is now married to Kit Bailey, the daughter of the singer Roy Bailey. Martin and Kit now live in Sheffield and have a young daughter.

He has been nominated 32 times at the BBC Radio 2 Folk Awards, including nine times consecutively as Artist of The Year, which he has won twice. His album Prodigal Son was named album of the year in 2008 and a song from that album, “Never Any Good” was named best original song of the year.

The accompanying book to the Topic Records 70 year anniversary boxed set Three Score and Ten lists Prodigal Son as one of Topic’s classic albums. Never Any Good from the album is track seven on the fifth disk in the boxed set and Masters of War from Grinning In Your Face is track four of the sixth disk. He was a session musician on June Tabor’s album Aqaba which is another of the classic albums.

Martin Simpson is regarded by many as one of the most skilled folk guitarists currently playing on the British and American folk scene.

Stefan Sobell Martin Simpson Signature Model – for many years, Martin’s main performing guitars were made by British luthier Stefan Sobell, and his signature model can be purchased to special order.

Martin is also known to have owned and played guitars by a number of renowned American luthiers including Ervin Somogyi, Jeff Traugott and Bill Tippin, as well as British luthiers such as Ralph Bown. 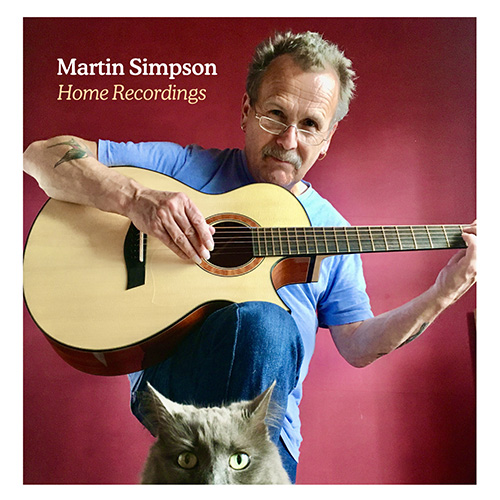