The second two releases in our Introduction series are available now 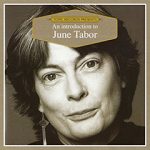 An Introduction to June Tabor (TICD003)
An introduction to the magical work of June Tabor. Covering songs from her many record releases on the Topic Record label between 1976 to 2011. June Tabor is quiet simply one of Britain’s greatest interpreters of popular Folk song and has been described by Elvis Costello as ‘The great voice of English folk music’.

Available now from the Propermusic.com, Amazon, iTunes, Spotify and all good music retailers.

An Introduction to Anne Briggs (TICD004)
An introduction to the magical work of Anne Briggs. Tracks include early recordings featured on albums ‘The Iron Muse’ and ‘The Bird In The Bush’ as well as material from her Hazards of Love E.P. and stunning solo album simply titled Anne Briggs. There is also the inclusion of tracks from her long-lost album ‘Sing A Song For You’.

Available now from the Propermusic.com, Amazon, iTunes, Spotify and all good music retailers.