Considered by many in the folk world as one of Martin Simpsons finest albums, Topic are proud to present here in their 80th year the first release on the Topic Treasures imprint, deluxe issues of classic Topic albums from the label. Prodigal Son, the classic album in all its glory along with a bonus disc of live tracks hand-picked by Martin Simpson himself.

Originally released in 2007, the album was hailed a classic, receiving 4- and 5-star reviews in such publications as The Sunday Times, The Guardian, Daily Express and Observer while Folk publications such as fRoots raved about its wonderment!

One of the stand out tracks if there is such a thing on this album of quality is ‘Never Any Good’ a song about Father and Son relationship, stands out as the shining star. In truth the whole album is a true tour de force and a beautiful body of work from one of the greatest guitar players in the world.

The bonus disc 2 features 9 live tracks recorded at the Union Chapel in Islington, London on 13th November 2007 and features Andy Cutting, Andy Seward and Kellie While in Martin Simpsons band for the gig. Tracks such as ‘Duncan and Brady’, ‘Never Any Good’ and ‘Good Morning Mr Railroad Man’ are played with such beauty and style.

A long overdue reissue of the classic first album from Anne Briggs on Topic. Widely regarded as a long-lost treasure and recorded in 1971 by Sean Davies and featuring Johnny Moynihan from Sweeny’s Men on bouzouki.

Anne Briggs began singing in local folk clubs in her teens. In 1962 she became part of the Centre 42 tour which was a leftist group of artists, writers, actors and musicians whose aim was to make arts and culture accessible to the masses. Ewan MacColl first heard Briggs’ remarkable voice and persuaded her to join the group and tour. There Briggs met MacColl’s comrade A.L. ‘Bert’ Lloyd who became her mentor.

Briggs debut EP, The Hazards Of Love, was produced by Lloyd. Lloyd also recorded Briggs for Topic released albums The Iron Muse and The Bird In The Bush.

In 1971 Anne Briggs recorded this, her debut full length album simply named Anne Briggs with Johnny Moynihan of Sweeny’s Men appearing on one track. Tracks include ‘Blackwater Side’, ‘The Snow It melts The Soonest’ and ‘Go Your Way (My Love)’.

Famously, Briggs taught Bert Jansch the song ‘Blackwater Side’, which he recorded on his classic 1965 debut album; the next year his pivotal traditional album Jack Orion largely comprised songs he learnt from Briggs who helped him understand the structure of folk song. Briggs and Jansch also wrote a handful of songs together. ‘Go Your Way’ being one of them.

Briggs went onto recorded a follow up album The Time Has Come later that same year for CBS. Two years later she recorded again but blocked the album’s release because she was so disheartened by her singing and retired from the limelight only to resurface in the mid 90’s to perform with Bert Jansch for a TV documentary. 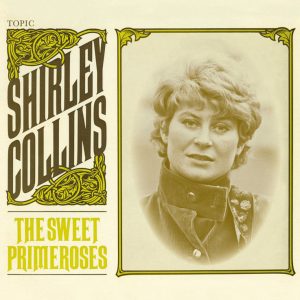 Topic Records are proud to present the Shirley Collins album The Sweet Primeroses plus bonus material by way of the Heroes Of Love Topic EP with sleeve notes by Colin Irwin and photos by Brian Shuel and packaged with the original album artwork.

During the 1960s and 70s Shirley Collins was regarded by many as the first lady of folk music, the subsequent decades have only served to enhance that reputation. Between 1955 and 1978 she recorded for the Folkways, Argo, Harvest and Topic labels. After the release of ‘For As Many As Will’ in 1978 she withdrew from performing and the music world after developing dysphonia. Shirley recently returned to recording after a very long hiatus and is still widely acknowledged as one of the finest singers and ambassadors to have emerged during the Folksong Revival of the 1960s.

Few singers of the English folk revival have attempted as much on record as Collins – an extraordinary combination of fragility and power. “I like music to be fairly straightforward, simply embellished – the performance without histrionics allowing you to think about the song rather than telling you what to think.” Through an impressive series of experimental recordings Shirley established an extraordinarily sympathetic marriage of traditional songs handed down through generations of rural labouring people with ground breaking contemporary arrangements – recordings that have scarcely been equalled in subsequent decades. 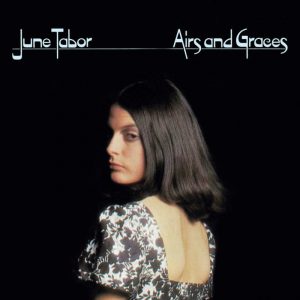 For four decades and more since that day in 1976 when June Tabor ventured into Sound Techniques – a small barn in Fulham converted into a recording studio – to make her very first solo album, she’s been consistently revered, not just in folk music circles, but many realms beyond.

With a voice of rarefied beauty, a subtly emotive and imaginative delivery and an unerring ear for a song to make us cry, laugh, get angry, be sad and think a lot, she holds a special place in the hearts of all who crave more of music than the superficial gloss in which we usually find it wrapped, sealed and delivered.

Airs and Graces features 10 beautifully recorded tracks featuring Folk legends Nic Jones on guitar and fiddle and John Gillaspie playing piano, organ, roxichord, bassoon and sopranino recorder! This classic first solo album by June was a long time coming but was well worth the wait. This beautiful Topic Records Deluxe issue includes 4 bonus tracks hand-picked by June herself along with an introduction and notes by June and respected Folk journalist Colin Irwin.

Tracks include While Gamekeepers Lie Sleeping, Bonny May, Reynardine and the Eric Bogle classic The Band Played Waltzing Matilda. This track stopped people in their tracks, routinely reduced audiences to tears and went on to have a colourful and slightly bizarre life of its own. The June Tabor version remains one of the most telling and emotive anti-war statements ever.

Although originally released in November 1981, time has been good to ‘Handful Of Earth.’ The passage of the years has done little to erode its magisterial strength and potency as a milestone within traditional music – one that quickly established Dick Gaughan as one of the most passionate and fiercely political British folk singers. Greatly inspired by the political turmoil in Scotland following the Conservative Party victory at the 1979 general election, the album was also Gaughan’s first after spending several years largely avoiding playing music while regaining his health following a mental breakdown in 1979.

Instantly recognised as a masterwork straightaway (a Melody Maker magazine album of the year), over the course of the decade, panegyrics and plaudits proliferated – Folk Roots’ (now fRoots) readers and critics voting it the album of the decade in 1989. In terms of influence, Handful Of Earth is up there with the select pantheon of The Watersons’ Frost and Fire, Martin Carthy and Dave Swarbrick’s Prince Heathen, Nic Jones’ Penguin Eggs and June Tabor & Martin Simpson’s A Cut Above. Amongst its legions of fans, Billy Bragg and comedian/writer Stewart Lee cite it as one of their favourite albums ever.

‘Handful Of Earth’ contains a quiver of traditional and contemporary songs – Robert Burns’ lyrical, ‘Now Westlin Winds,’ the feisty ‘Erin Go Bragh,’ Phil & June Colclough’s evocative, ‘Song For Ireland’ and his own reworking of the traditional ‘Both Sides The Tweed,’ which calls for Scottish independence without sacrificing friendship with the rest of the UK (as topical now as it ever was).

Gaughan’s fifth solo studio LP and his third for Topic, with Mick Campbell’s apposite cover portrait of our man in black against the backdrop of an industrial/agricultural landscape, was clearly a classic from the start. The label’s original press release, written by head honcho, Tony Engle, began :”With his new record, Dick Gaughan has surpassed himself. I’ve always had great respect for Dick, and admired all his records, but Handful of Earth puts him on a new and even higher level. I think it’s the most powerful and inventive record he’s ever made.” Engle goes even further : “This is a record that actually advances music.”

By definition “re-issues” are “a thing of the past” not so for “The Reckoning” more a thing of the present if not the future. With three additional “postscript” tracks, an entity within themselves, the whole of this multi-award winning album’s timeless quality continues to challenge preconceptions and genre stereotyping. There’s enough contained to warrant inclusion in any record collection such is the breadth of style and song-making.

The third of his critically acclaimed solo albums, “The Reckoning” was released in 2005 winning three of the coveted BBC Radio 2 Folk Awards for Best Album, Best Traditional Track (The Bitter Withy) and Folk singer of the Year.

MOJO describes him as “One of the ultimate British songwriters.”

The album is a masterful collection of traditional and self-composed songs including a spellbinding revision of “The Bitter Withy,” a powerful re-making of “A Man Of Constant Sorrow” and a magnificent song-cycle dedicated to “The Sea.”

Mick Houghton writes: “he remains all too often uncited as a significant player in bringing folk music to a wider audience across all platforms, now a ubiquitous component in the performing arts.”

Film, television, radio and the stage have played a vital role in his life both as actor and musician, Tams perhaps being best known for playing a regular character (opposite Sean Bean) in the ITV Sharpe Series, as Rifleman Daniel Hagman. He also co-wrote the score alongside Dominic Muldowney releasing “Over The Hills And Far Away” an album selling over 120,000 copies.

As a member of the original creative team he provided all the songs for War Horse at the National Theatre – now a multi-award winning global phenomenon seen by over 10 million people worldwide, the most watched production in the National Theatre history. He also worked personally with Steven Spielberg and John Williams on the movie version.

On July 5th, “The Reckoning” is re-issued; War Horse is playing in Hong Kong prior to Singapore and New Zealand and John is writing an audio autobiographical songbook “How To Build A Ghost” whilst continuing his commitments to theatre, the screen and the concert stage.