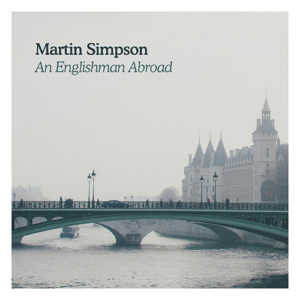 Martin Simpson releases An Englishman Abroad, the latest digital single from his upcoming album Home Recordings, today. The new single is the third song released from the upcoming album following on from October Song and The Times They Are A-Changin’.

Martin says in the Home Recordings liner notes, “I wrote An Englishman Abroad about people I met when I lived in New Orleans, Henry, Lily and Miss Dixie. I recorded the song on the album True Stories, and after that came out I later found out more of the history. I moved back to the UK in 2000, and Lily died shortly after that, and Henry just a few months later, finally released. Miss Dixie founded Dixie’s Music Bar in 1939 with her sister Irma. Dixie was a successful singer and clarinet player but her main claim to fame was that she presided over the first well known gay hangout where Hollywood stars among others could listen to Jazz music and be out. I lived 2 doors from Miss Dixie on Bourbon St, and Dixie looked after Miss Lily who was frail and ill in her final years. Previously Lily had played piano for Miss Dixie.”

You can listen to An Englishman Abroad below or find it on Spotify, Apple Music and all digital services.