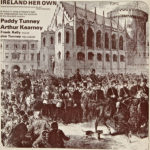 When Chesterton wrote of the Irish “All their wars were merry and all their songs are sad” he was sacrificing accuracy for the sake of a paradox. The wars themselves were ruthless savage campaigns of destruction on the one hand and desperate struggles for existence on the other. The British fought as conquerors with scant regard for the rules of war, the Irish fought for something ancient and good, and they fought as crusaders. Their songs reflected their attitude, full of sadness for previous defeats, but convinced of the justice of their cause and confident that the final battle would be won.