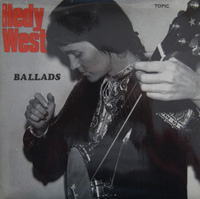 Many of the finest traditional ballads from the British Isles were preserved by the families of settlers in the American South, where they existed alongside native American balladry. Hedy West, a native of North Georgia in the Appalachians, was one of the very few performers who were at home with the various manners of performing these ballad traditions. ‘Ballads’ is a splendid recording from 1967 which continues to influence contemporary musicians like Martin Simpson, three decades later.