Peter Bellamy – The Fox Jumps Over The Parson’s Gate 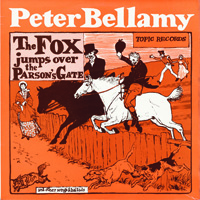 Peter Bellamy (1944 – 1991) was one of the most distinctive voices of the British folk revival, a singer who made the traditional songs and ballads of England vital, exciting and entertaining. As a member of the powerful acapella group the Young Tradition, he helped reawaken an interest in the traditional songs of England. Bellamy’s influences drew on a wide musical world; he was as passionate about the singing of the Copper Family, Ewan MacColl, Harry Cox and the prisoners of Parchman Farm as he was the music of the Rolling Stones. Bellamy’s recordings continue to inspire musicians around the world.

1  The Spotted Cow
2  Two Pretty Boys (The Two Brothers)
3  The Female Drummer
4  Here’s Adieu, Sweet Lovely Nancy
5  The Ghost Song (The Cruel Ships Carpenter)
6  The Carnal and Crane
7  The Little Black Horse (The Penny Wager)
8  The Barley and the Rye
9  The Turkish Lady
10  The Warlike Seaman (The Irish Captain)
11  The Blackberry Fold
12  Saint Stephen
13  The Rigs of London Town
14  The Fox Jumps Over the Parson’s Gate