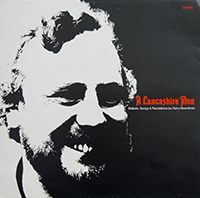 Harry Boardman was a mainstay of the folkscene in his native Lancashire and a singer of great vitality. His extensive repertoire focused on local songs old and new.

Harry Boardman is par excellence Lancashire’s native son. He was born in the cotton town of Failsworth, near Oldham, in 1930. His mother and grandparents were weavers and spinners. Harry himself has worked on the railways and as a printer. He began singing Lancashire songs in his early twenties, and is an outstanding pioneer of the folk song revival in the North-west. The folk song club he founded in Manchester in 1954 was among the first in the country.

He is a devoted researcher into the local traditions of Lancashire – not only the songs but the tales, sayings, speechways and the like, and few can match him for knowledge of the dialect poetry of the region. Not that his interest is merely antiquarian, for he is much concerned with the current history and social developments of his area, as well as its dramatic past.
Lancashire is indeed fortunate to have such a fond delver into its working class culture, and such a fine exponent of its varied and vital traditions.