Ewan MacColl – Chorus From The Gallows 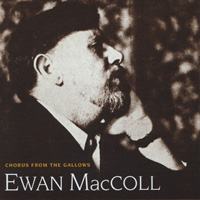 Ewan MacColl was one of the architects of the folksong revival. Whether as an interpreter of ancient ballads or as a writer of new songs, he influenced almost everyone involved in folk music in the 1950s, ’60s and ’70s. He brought the same skill and understanding to songs of Britain’s industrial cities, ballads of Scots history and lyrics from the English countryside. His own compositions, many of which have passed into the common currency of folk music, are featured both on his own albums and on The Radio-Ballads.

Chorus From The Gallows, first released in 1960, opens with the tale of Craig and Derek Bentley and closes with “Go Down Ye Murderers,” which relates the story of Timothy John Evans, convicted and executed for murders he did not commit, both true and awful stories from the annals of 20th century British justice. The repertoire ranges from the cattle-rusting border raiders of the Middle Ages and the 18th-century highwayman Dick Turpin to MacColl’s own compositions about controversial murder trials of the 1950s.