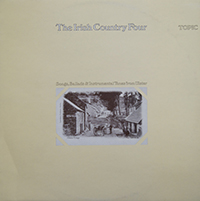 The IRISH COUNTRY FOUR from Belfast had a wonderfully original take on traditional repertoire from Ulster. Their sole recording was reviewed at the time as ‘an excellent records… they sing the songs and play the tunes of their homeland with an involvement that is quick to rub off on the listener.